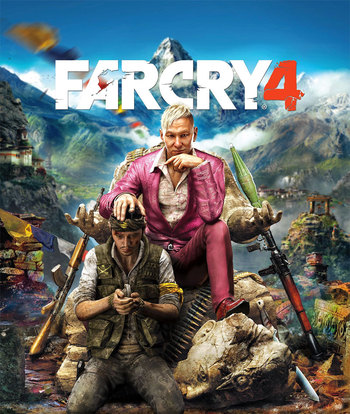 Darling, you got to let me know:
should I stay or should I go?
"Now, before we begin... ah... to whom am I speaking? Hm? The son who returned to scatter his mother's ashes, or the lunatic who has murdered his way to the top of my mountain?"
— Pagan Min
Advertisement:

The fourth game in the Far Cry series (a thematic sequel, but with references to Far Cry, Far Cry 2, and Far Cry 3), set in Kyrat, a war-torn Fictional Country in the Himalayas.

You play as Ajay Ghale, a young man visiting Kyrat to scatter his mother's ashes. After a violent border crossing, Ajay meets Pagan Min, the flamboyant and insane self-proclaimed ruler of Kyrat. Violence ensues. So do selfies. The game features a greater sense of verticality than its predecessors, with a grappling hook and miniature helicopters joining the wingsuit from the previous game as major methods of traversal.

Far Cry 4 also features drop-in drop-out co-op, with players on PlayStation systems being able to join a friend's game for co-op free-roam without owning a copy.

"Oh, good. You feel better now? Get it out of your system? Perfect. Maybe now we can finally shoot some goddamn guns!"