Tabletop Game / The Republic of Rome 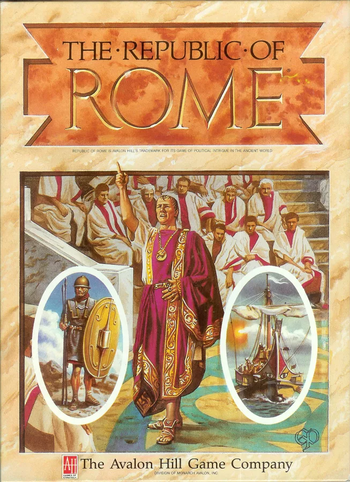 Senatus Populusque Romanus
The Republic of Rome is a 1990 Board Game from Avalon Hill that simulates the senatorial politics of pre-Imperial Rome. Each player takes control of a distinct faction within the Senate and must recruit senators to their cause and expand their personal influence and wealth to emerge as the dominant force in Roman politics. The game can be played in one of three settings (Early, Middle, and Late Republic), with different historical statesmen, wars, and Random Events available depending on the time period.
Advertisement:

Like most AH games, ROR is notoriously simulation-heavy, while its cutthroat political gameplay had earned it the reputation of "a game designed for people who consider Diplomacy to be too tame". The gameplay occurs in turns, with each one divided into seven phases:

Winning the game requires either a) rebelling against and toppling the Republic, b) becoming a Consul for Life, or c) having the most combined influence as a faction when the random events deck runs out. The game ends in a collective defeat for all players if either d) Rome must fight four or more wars at the same time, e) the people revolt, or f) the state treasury cannot pay for any required expenses — although if a senator is in rebellion when e) or f) occurs, his faction wins instead!