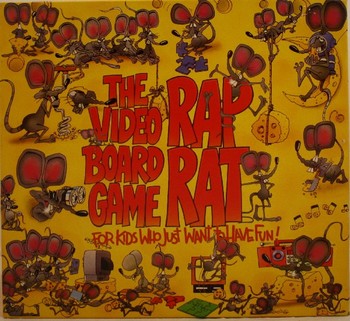 Rap Rat is a board game that uses a VHS, released in the early 90's. Created by A Couple 'A Cowboys, the team behind Atmosfear, the goal of the game is to collect pieces to a puzzle the same color as your mover by rolling the dice and moving around the board, with the video running concurrently as you play. While playing, the titular Rap Rat will occasionally interrupt and shout orders to the players.

While similar in concept but more lesser-known than Atmosfear, it is now more famous for a creepypasta based on the game, as well as its video clips.