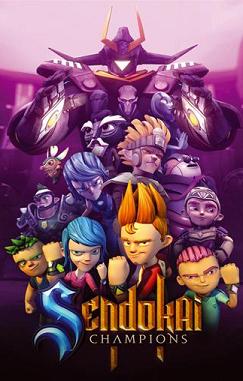 Long time ago, there was an empire known as Zorn. Named after its founder and emperor, Zorn The Great, this empire was so powerful and feared, that nearly all the dimensions in The Multiverse knew about them and their conquests. For 10,000 years, this empire invaded and conquered many universes, civilizing any primitive cultures they met and extracting every resources they found, specially the Sen, "The essence of life"; but it also organizes a multi-dimensional tournament where the strongest free cultures bet their freedom with them in matches of Sendokai.

Sendokai is an ancient sport practiced by the Zorn and the many cultures of the Multiverse that consists of contact variation of soccer: timed 4vs4 matches where the first team that hits 3 points wins. The main difference with Soccer is that the players can use tactics and techniques using Sen to create solid-light constructs that boost abilities, hinder opponents and aid allies akin to Green Lantern powers mixed with martial arts. These features con be also used for warring purposes as the Zorn had shown before in their conquests.

As the Zorn conquered more and more universes, they set their eyes in a curious plane named the Gea Dimension, where the center of their civilization is a planet called Earth. There, four mysterious bracelets fell in hands of the ones who would later be the representatives of Earth in the next Sendokai Tournament. Ironically, as their coach and Sendokai master Tanpo the Waadan would discover, the mankind's new champions would be a group of merely 4 13-year olds boys and girls with no talent in sports whatsoever.

Sendokai Champions (Desafío Champions Sendokai in Spain) is a Spanish CGI Animation series co-produced by Kotoc, a Spanish CGI animation company, and RTVE, the state-owned independent entity that promotes content for public television and radio in Spain, where in 52 12-minute episodes, tells the story of a team of 4 friends: Zak, Cloe, Kiet and Fenzy, and their struggles against the Zorn in their way to the next Sendokai Tournament.