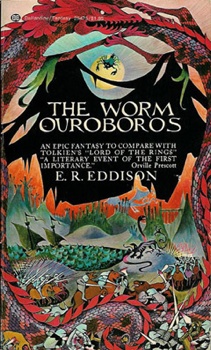 "Rightfully, having such a timeless life, this King weareth on his thumb that worm Ouroboros which doctors have from of old made for an ensample of eternity, whereof the end is ever at the beginning and the beginning at the end for ever more."
— Lord Juss, Chapter XIII: Koshtra Belorn
Advertisement:

A High Fantasy novel written by Eric Rücker Eddison in 1922, predating The Lord of the Rings by more than 30 years, The Worm Ouroboros presents a sort of transitional text between classic high romance and modern fantasy. The novel focuses on a long war between Witchland (under King Gorice) and Demonland (led by Lord Juss and his brothers) in a fictional version of the planet Mercury, inspired primarily by Norse sagas and Classical Mythology. A notable similarity to LOTR is that both novels feature a heroic quest (Juss and Brandoch Daha's quest to rescue Goldry Bluszco) against the backdrop of a protracted war.

Despite drawing on similar sources as J. R. R. Tolkien's masterwork, Eddison's world contrasts strongly in tone and morality: it is a world of Chivalric Romance and proud warriorsnote with the notable exception of the scholarly Lord Gro who believe the best way to die is on the field of battle. War Is Glorious and without a constant struggle against a worthy foe the lives of heroes would become meaningless. Another difference between LOTR and The Worm Ouroboros is that Eddison's world is made largely ad hoc by mixing elements of various Mythologies (primarily Norse and ancient Greek, but also some Arabic and Arthurian) and assigning names almost randomly. This was the main complaint Tolkien had about the novel, but he praised it overall nevertheless, particularly its originality. As the man said: "The greatest and most convincing writer of invented worlds that I have read." Finally, although both LOTR and The Worm Ouroboros contain a number of poems, Tolkien's poems are his own creations, while Eddison's novel incorporated actual early modern poems (all properly credited).

Note that the names "Demons", "Witches", "Imps", "Pixies" etc. do not have their traditional meaning. Rather, they are more like nations, and are able to interbreed. Basically, they're all either humans or Rubber-Forehead Aliens. This fact, together with some of the character's names, stem from the author's childhood. As an adult, he actually revived the heroes of his childhood stories and wrote an entire novel about them, and it seems he simply didn't have the heart to change their names, even if they sounded childish.

The Worm Ouroboros is in the public domain. You can find the text online at Sacred Texts

. Or listen to the audiobook.

The Worm Ouroboros provides examples of: