Literature / Woman on the Edge of Time 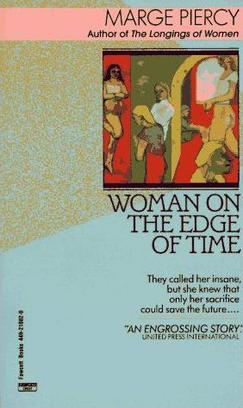 Cover of the 1988 edition
"There's always a thing you can deny an oppressor, if only your allegiance. Your belief. Your co-oping. Often even with vastly unequal power, you can find or force an opening to fight back. In your time many without power found ways to fight. Til that became a power."
— Bee
Advertisement:

Woman on the Edge of Time is a 1976 novel by Marge Piercy. It is considered a classic of speculative utopian fiction and feminist literature.

The story follows Consuelo "Connie" Ramos, a thirty-seven-year-old Mexican American woman living in New York City, who is involuntarily committed to a mental hospital by her niece's pimp after injuring him in a fight to protect her niece from the abortion he was trying to force on her. Connie winds up in a different hospital, where she and her friends Skip, a young gay man, and Sybil, a practicing witch, are subjects in an experimental trial of brain implants designed to "rehabilitate" supposedly violent patients by allowing an outsider control of their emotions.

But Connie has a secret weapon: Due to her unusual empathy and emotional receptivity, she had been psychically contacted by Luciente, a woman born over a hundred years in the future. With Luciente's help, Connie is able to "visit" this future society, which is nigh utopian. Sexism, racism, homophobia, and greed have been eliminated, living is communal, and individual freedom is paramount. Yet eventually Connie learns that Luciente's world is threatened by a rival faction—one that where the privileged few control the masses through drugs and mind control technology eerily similar to what Connie has been enlisted to test. Enlightened by these two alternative futures, Connie sets about to interfere with the trials ... or die trying.

Tropes appearing in Woman on the Edge of Time: