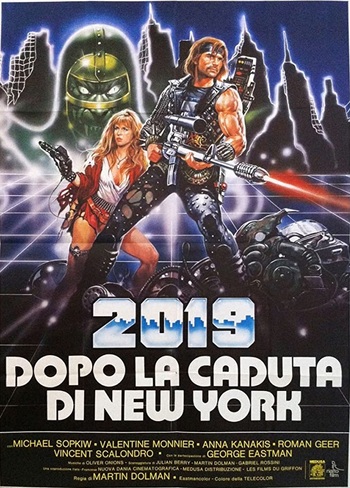 "In the year 2019, the future depends on one man."
Advertisement:

In a world where a nuclear war between the Americas and Eurasia has rendered most of humanity infertile, it looks like the end for humanity. However, the Americans have learned of a girl in suspended animation in the ruins of New York City who can still reproduce. Their enemies are after her too, however, and will subject her to horrific experiments. They hire a mercenary from the desert to infiltrate the Big Apple and bring her back in one piece.

As one can tell, the film was influenced by John Carpenter's Escape from New York. However, this film's plot in turn may have provided some inspiration to a better known film with a similar premise...