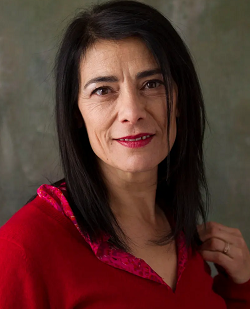 Hiam Abbass (born 1960) is an Israeli-born Palestinian actress and director. She has starred in many Arabic and French-language films, including Haifa, Red Satin, and The Syrian Bride, as well as roles in acclaimed English films like The Visitor, playing Arab women of various origins. In the United States, she is perhaps best known for her roles in Blade Runner 2049 and Succession.