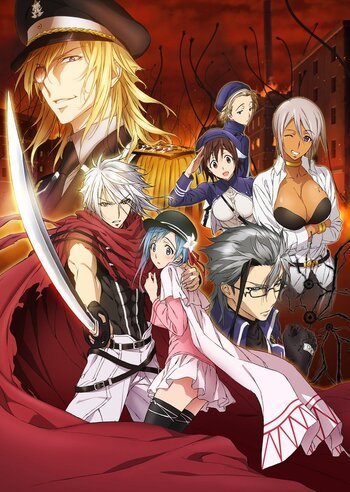 The Flash Baron
To steal away everything in this country. That is my purpose.
Advertisement:

It's the year 305 of the Alcian calendar, and the world is currently entirely controlled by "numbers." Every human born is branded with a "Count." This Count can be anything; the amount of kilometers walked, or the amount of people who have said your food is tasty. If your Count drops to 0, you will be sent into the Abyss. After Hina's mother's Count dropped to 0, her last request was for Hina to look for the Legendary Red Baron.

Cue several years later, when she comes across a man claiming to be the Red Baron who seeks to take her Count and the mysterious Ballot she possesses that was given to her by her mother. When there seems to be no more hope, a man in a mask appears and the truth becomes clear.

Plunderer is an action-fantasy manga story by the creator of Heaven's Lost Property, Suu Minazuki, in 2014 and is currently on-going. The anime adaptation premiered January 8 2020, with a simultaneous dub by Funimation.