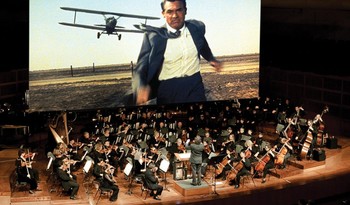 Sound in media is typically split into two forms: Diegetic and Non-Diegetic. Diegetic is roughly equivalent to In-Universe — the characters can hear this sound. Non-Diegetic sound is "audience-facing" — only the audience hears it, but it is still a significant part of the story.

Not all Dialogue and Music Tropes directly relate to diegesis, as individual sounds can, in different situations, be either non/diegetic or both. Listed below are tropes for which diegetic status is integrally important to meaning.

When a work creator makes use of a sound restriction or lack thereof, it has various creative purposes. There are different levels of characterisation, of story development, and of juxtapositional relationships that can be influenced by where sound originates and where it goes. And sometimes, it's just for humour.

This is an Omnipresent Trope, which means that you could say "Work X uses Audio Diegesis in this way for this purpose", but you should use the more appropriate trope below.

There are also times when the diegetic barrier is crossed, there are tropes that deal with this: