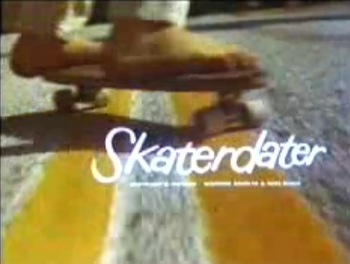 Skaterdater is a 1965 short film (18 minutes) directed by Noel Black. It is a simple tale of young boys and their skateboards, filmed in Torrance and other Los Angeles County locales, with a cast of amateurs.

A group of boys of about 12 years or so have a sort of skateboarding gang. They zip around their suburban neighborhood on their skateboards, dressed identically, performing incredible stunts. One boy, who seems to be the leader, is distracted from his skateboarding buddies by a pretty girl seen riding around in her bicycle. He begins to hang out with the girl, much to the disgust of his buddies. Finally, another boy challenges him for leadership of the gang.