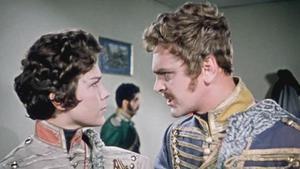 Shura (Golubkina, on the left) and Rzhevsky (Yakovlev, on the right)
Hussar Ballad (Гусарская баллада) is a Soviet musical comedy from 1962. It was directed by Eldar Ryazanov and starred Larisa Golubkina, Yuri Yakovlev, and Igor Ilyinsky.
Advertisement:

Set in 1812, the movie follows Shura (Golubkina), a girl who just turned 17. Her uncle and legal guardian arranges a masked ball in her honor, and for that ball she dresses as a hussar cornet (second lieutenant). The uniform fits her so perfectly, that even a real hussar lieutenant Rzhevsky (Yakovlev) does not realize he is talking with a girl instead of a fellow officer. As there is an arranged marriage between her and Rzhevsky, which neither of them seems to favour, she uses this opportunity to tease Rzhevsky mercilessly, getting him to reveal everything he doesn't like in women, and then, dressed as a girl, giving him exactly that.

However, this game ends quickly as the local governor arrives at the ball announcing that the war with France started. Rzhevsky, after saying a few ardent words about protecting one's motherland, leaves for the army, still not knowing he was played with. Shura, inspired by his words and wanting to prove herself on a battlefield, leaves shortly after. She successfully gets into the army, although not as a front line fighter, as she wanted, but as a messenger. Only much later she meets Rzhevsky again, purely by chance. She also meets Field Marshal Kutuzov (Ilyinsky) who, accidentally, uncovers her secret, but the situation forces him to keep his mouth shut. Finally, she joins Colonel Vasilyev’s guerrilla squadron and gets some real action.

"Hussar Ballad" premiered in theaters on Sept. 7, 1962. It received very positive reviews, and remains quite popular ever since.