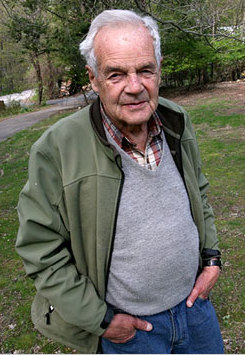 Peter Fernandez (January 29, 1927 – July 15, 2010) was an actor, voice actor and director from New York City. He began as a child model for the John Robert Power Agency and had appeared on both radio and Broadway until he was drafted into the US Army at the age of 18. After his discharge from the Army in 1946, he had become a writer for both radio and pulp fiction, and later on had worked both in voice-acting and as a director. His notable role includes his work in Speed Racer, having voiced Speed Racer and Racer X as well as served as the lyricist of the English version's theme song as well as further voiced Headmaster Spritle and played the role of the racing announcer in the live action 2008 film. The announcer's rapid-fire delivery of dialogue was devised by Fernandez and his fellow co-stars in order to mimic the mouth flaps of its original version.

He was also notable for his work for for Courage the Cowardly Dog, which he noted as among his favorite works, where he was the voice director and voiced cameo roles throughout the series.

Fernandez had lived in Pomona, New York with his wife, Noel Smith. On July 15th, 2010, Fernandez had passed away from lung cancer at age 83.