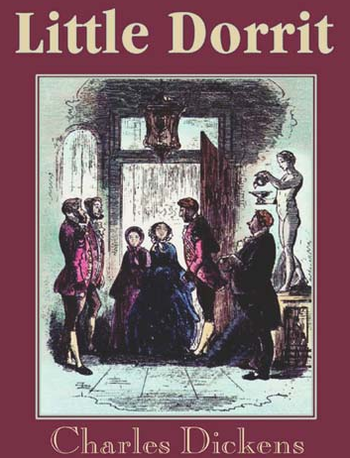 1855 Charles Dickens novel about wealth, status, political and economic corruption, and The Power of Love.
Advertisement:

The central figure is Amy aka Little Dorrit, the 'Child of the Marshalsea'. Which is to say, she was born in this debtor's prison — a nineteenth-century English institution in which defaulters were incarcerated, along with their families as necessary, until such time as they were able to pay what they owed.

As the story opens, Amy's father William Dorrit has likewise earned the title of 'Father of the Marshalsea' as the longest-serving inmate; his particular debts are so involved — and he himself so helpless in the face of them — that he's been locked up for twenty-five years now with no hope of release any time soon. With little to work with save her own innate goodness, young Amy determinedly takes charge of the family after her mother dies, fiercely guarding her father's pretences to being merely a gentleman temporarily down on his luck to the extent of not telling him that she's also arranged for her older siblings and herself to work outside the prison.

At the same time, in a more upscale part of London, Arthur Clennam has returned to his gloomy, forbidding childhood home after years abroad in the family firm. Fortysomething and vaguely depressed over what he considers a wasted life, Clennam is nevertheless still a gentle and idealistic man. His father's last words have given Arthur reason to believe that his stern, fanatically religious mother may be hiding knowledge of a serious injury the firm may have done to parties unknown. Arthur is determined to find and right this wrong as far as in him lies, even after his mother angrily rejects the idea out of hand... especially after he discovers that nevertheless, in a burst of completely uncharacteristic altruism, she has hired Little Dorrit to work in her house.

As per usual in Dickens, their stories intersect not only with each other's, but with those of Loads and Loads of Characters. Clennam's interest in the Dorrits' case soon leads to a stunning reversal of fortune: as it turns out William Dorrit is the long-lost heir to a great estate. To Amy's frank bewilderment, her family's unswerving goal thereafter becomes acceptance in the highest circles of Society, as led by the great financier Merdle — or, more accurately, by his wife and her 'fine bosom'. As a corollary, of course, the Dorrits' efforts require blotting out all memory of their past... up to and definitely including Little Dorrit's years of patient care and loyalty. To better make this clean break, they embark on a grand tour of Europe.

Meanwhile back in London, Clennam, having resigned from the family firm, is slowly-but-surely beginning to find real purpose in life with the help of his steadfast friends, eccentric genius inventor Daniel Doyce and retired banker Mr. Meagles — and despite the hindrance of the Barnacles who staff the infamous Circumlocution Office, the official bastion of How Not to Do It. Also prominent in the mix is Meagles' daughter, pretty, spoilt Pet, whose eventual marriage to a rogue convinces Arthur he's now far too old for romance. Instead — between intervals of wondering just why a certain sinister foreigner is suddenly being welcomed into his mother's house — Clennam throws himself into helping make Doyce's manufacturing works a success...

...until the looming shadow of money, secrets and pretense that has hovered over the entire cast lowers once more.

There are two noteworthy adaptations of the novel: the Oscar-nominated 1988 film duology with Derek Jacobi as Arthur Clennam and Alec Guinness as William Dorrit, and the Emmy-winning 2008 BBC miniseries with Claire Foy as Amy Dorrit, Matthew MacFadyen as Arthur, and Andy Serkis as the villain Rigaud.