Series / The Legend of Zhen Huan 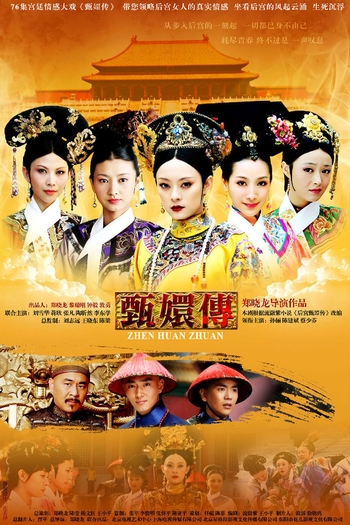 The Legend of Zhen Huan (后宫·甄嬛传; Hòu Gōng · Zhēn Huán Chuán) is a 2011 Chinese drama based on a popular internet novel. The drama is set in the harem of Emperor Yongzheng of the Qing Dynasty. Spanning 76 episodes (almost twice as long as the typical Chinese series), it's considered one of the most successful dramas in the recent years.

The story follows the trials and tribulations of Zhen Huan, a concubine of the emperor, as she survives the perilous Inner Palace, where nothing is as it seems.

The series has been exported to the US as a miniseries titled Empresses in the Palace (made available on Netflix). The entire series is condensed into six 90-minute episodes, using original Chinese dialogue with English subtitles. The opening and closing themes are also changed for the US release.

The 2018 series Ruyi's Royal Love in the Palace, also called Legend of Ruyi, is the official sequel to The Legend of Zhen Huan, with the actress Vivian Wu playing as Empress Dowager Niuhuru, the older Zhen Huan.

The Legend of Zhen Huan contains examples of: