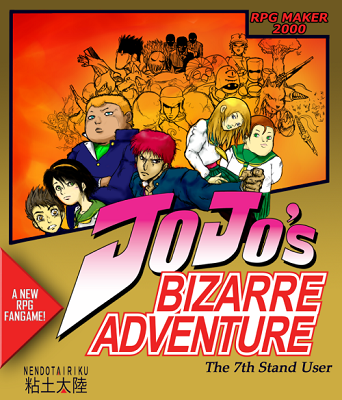 "[...] It seems a new destiny is beginning... That would be your destiny... You, nameless one, apostle of Fate... You are about to walk a path full of pain and suffering... However, it is necessary that you continue to fight. Please accept this small offering... Your very own Stand. I hope you use it well."
— Unknown Speaker to the 7th Stand User.
Advertisement:

is a fan game made by Clayman for the massively influential manga. It's an RPG in which you are given 1 of 18 different Stands by a mysterious benefactor known only as "Steel", based on your answers to a personality quiz given at the beginning. Using this Stand, you join (or don't join) the main characters of Stardust Crusaders as they journey to Egypt in order to kill DIO and cure Holly of her Stand-induced sickness. Everything starts out like the source material does, but make the right decisions and events will diverge, for better or for worse.

A fan game sequel to the fan game is being developed with Clayman's approval, known as The 7th Stand User 2: Fate is Unbreakable. It will feature the cousin of the protagonist of the first game, going over the events of Part 4 of JoJo. Info on the sequel can be found here