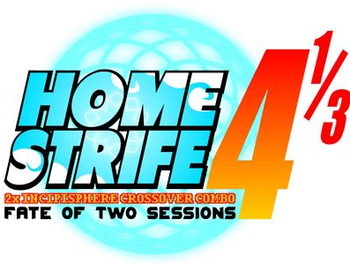 Homestrife 4/13: 2x Incipisphere Combo (Fate of Two Sessions), often shortened to Homestrife, was an in-development Free-Floor Fighting game with characters from the webcomic Homestuck as its playable roster. It was started by MSPA forumer Callan "frozenMeatpopsicle" Bencich, who is the project director, art director, and lead animator. Fellow forumer Jonathan "Darlos9D" Royal programmed the entire SDL-based game engine, along with a character creator.

According to Bencich, the gameplay would have been "mainly based on Super Smash Bros, but we'll be injecting it with mechanics from more traditional fighters, like Street Fighter, Marvel VS Capcom and Blazblue, to attempt to make a deep, technical fighter that even high level players can appreciate and enjoy." Controls are based around two attack buttons (light and heavy), a jump and a block button, and directional input from an analog stick/arrow keys. Life and Special meters are assigned to each player.

Pre-Alpha 2.6 includes John with all light moves, one heavy move, and one projectile, local two-player, a basic menu, some hilarious voice clips, and most importantly full playability and matches. It can be downloaded here

, along with the older tech demos and a tool for making your own palettes. The full version will include a roster of twenty characters (the 4 original kids, the 12 original trolls, Doc Scratch, Bec Noir, Andrew Hussie himself, and a super-secret character) as well as online multiplayer and several other gameplay modes. The first official beta release (which is the dev team's current goal) will include John, Rose, Karkat, and Vriska, along with stages based on LOWAS, Sweet Bro and Hella Jeff, and Equius Zahhak's robot cage.

, which contains links to the development thread, the recruitment blog, the game itself, and other helpful pages.In 2014 the game's development went on indefinite hiatus and in 2019 the created assets were made open source, almost certainly confirming the project dead in the water.