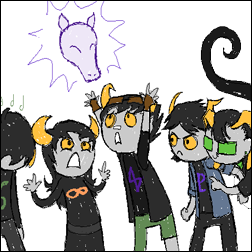 Team Paradox is one of the largest Homestuck roleplays on the MS Paint Adventures Forums as well as one of the most developed. It depicts six Trolls who decide to take on a game known as Sgrub with each other. And then things go wrong.

in the forums, or here

at the convenient mirror.