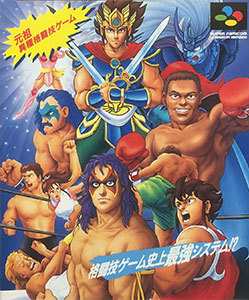 Hiryū no Ken (飛龍の拳, lit. "Fist of the Flying Dragon") is a Genre Mashup video game series developed by Culture Brain which ran from 1985 to 2000. The series started with the Arcade Game Hokuha Syourin Hiryū no Ken / Shanghai Kid, which is one of the earliest examples of a Mixed Martial Arts note (as in "style vs. style matches") Fighting Game. Its main feature is the "Mind's Eye" system, which indicates one of the two fighters' weak points to attack or defend. It was also one of the first fighting games with a special move, a Counter-Attack and a Finishing Move. In what would be a series' tradition, the main character, a Kung Fu practitioner, fights against martial artists who practice six different fighting styles (one of them being a Mirror Boss).

When the game was remade two years later for the Nintendo Entertainment System, it was turned into a 2D Beat 'em Up / Platform Game with RPG Elements and a story, although the fighting game roots were kept in its combat mechanics, and emphasized on martial arts tournaments and boss matches. The sequels moved further into Action RPGs, introducing a Five-Man Band with super modes, variable difficulties, Player Versus Player modes, and an RPG mode that replaces the combat portions with commands. This was also when Culture Brain was trying to push a Foreign Remake of the series with the Superhero-themed Flying Warriors and Ultimate Fighter.

When Street Fighter II revolutionized the fighting game genre, the series failed to keep up with the modern conventions, so it tried to Follow the Leader with the SD Hiryū no Ken games. Later, it also tried to borrow from the more "realistic" 3D fighting games like Virtua Fighter and Tekken in Virtual Hiryū no Ken and Hiryū no Ken Twin to little success, since the style returned into the SD slant. SD Hiryū no Ken Densetsu was the final title of the seriesnote not counting color rereleases of the Game Boy titles, which had a story mode that was a Video Game Remake of the first game.