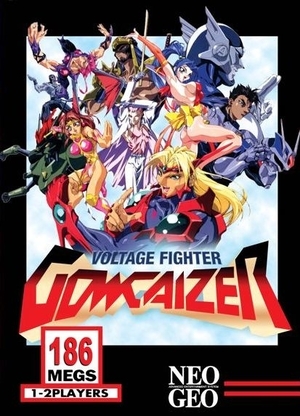 Voltage Fighter Gowcaizer is a 1995 Neo Geo Fighting Game by Technos Japan, which was later ported to the PlayStation in Japan only. It is unique in that the game is centered around a manga and superhero theme, and features character design by Masami Obari.

The gameplay at heart is pretty basic and has no complex combos. However, it has the main catch that during the run in the single-player mode, you are able to get the special moves of your defeated opponents.

In the year of 1999, the entire Kanto region of Japan was devastated in a terrifying record breaking earthquake. With Tokyo at the epicenter, the capitol of Japan is moved 115 miles offshore to a manmade island, and through such efforts, the new city of Neo Tokyo is born at the dawn of a new millennium. Along with reviving Tokyo into a new city, the project aimed to have public services and civil functions all automated by a central super computer for a safe and eased high quality of life for its citizens, and established a prestigious academy for the youth of Japan known as the Grand Bernard Institute.

Much to anyone's surprise however, crime exponentially skyrocketed in the years after, and with inexplicable cause, as officials considered the system infallible and with strict control by the computer's AI. Strangely, this all occurred upon Bernard electing a new principal, Shizuru Osaki. Though considered little much but coincidence by the public, plenty of individuals have correlated this conspiracy into truth with their own investigations and insights. As fate might have it, these individuals weren't just any normal people, but those with powers and abilities able to see through to the truth with their own fists. Into the year of 2017, along with protecting the citizens of Neo Tokyo from crime and evil, so have these unordinary people found that the root of it all lies deep within Bernard. Best of all, they are those better known as if lifted from the pages and chapters of sequential media itself: Superheroes.

Best said from a popular manga series before, Neo Tokyo is about to explode!

The game was later adapted into a three-part OAV directed by Obari, infamous for its strange English translation.