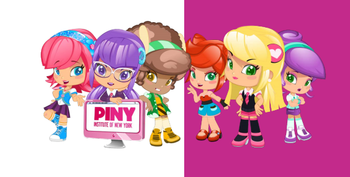 Say "hi" to the PINY!note The Indie Girls and Beautiful People, from left to right: Michelle, Lilith, Tasha, Rita, Julia, and Dory.
Advertisement:

PINY: Institute of New Yorknote Also known as PINY: Pinypon Institute of New York. is a Spanish animated children's Dramedy series created by Victor M. Lopez and Rubén Zarauza. As the title suggests, the series is based on the Pinypon toy franchise as it focuses on Michelle Fairchild, a humble 14-year-old who is interested in fashion and wants to become a top fashion designer. She gets offered one day an interview from the titular prestigious college PINY, and she gets accepted. She then befriends her roommates Tasha Robinson and Lilith Henderson, as they form the Indie Girls team. However, Michelle is also placed one room across from the spoiled leader of the Beautiful People, Julia Cooper, along with her loyal assistants Dory Skornik and Rita Finucci. The Indie Girls have adventures in the college while trying to work around Julia's plans to eliminate and humiliate them.

The show first premiered on Disney Channel in Spain on September 18, 2016, and also premiered on Pop in the United Kingdom in the year after.