Literature / A Wizard in Rhyme 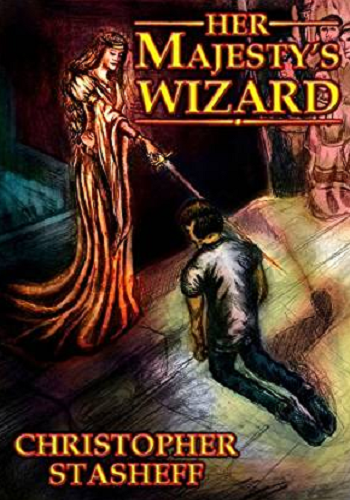 A Wizard in Rhyme is a fantasy series by Christopher Stasheff, combining Medieval European Fantasy with deconstruction, historical accuracy and a lot of troping.
Advertisement:

Our protagonist is Matthew Mantrell, Ordinary Graduate Student, English major and general intellectual, working on his doctorate during The Present Day (presumably The '80s, as that's when the first book was published). During his researches he comes across a piece of parchment covered in a language unknown to man. It turns out to be a Summon Everyman Hero spell that whisks him to "Merovence," the France of an Alternate History Europe still in The High Middle Ages. Once there, he makes a number of discoveries.

The series is relatively obscure. Books are a Cliché Storm: Matthew is set a task involving setting to rights another European country. He collects a Rag Tag Bunch Of Misfits as he travels, often supplementing them with Public Domain Characters created through Summon Magic; most of them fade back into obscurity, though two from the first book, the Black Knight, Sir Guy de Toutarien, and the dragon Stegoman, make repeat appearances. Matthew makes more study into the fabric of magic and Stasheff gets to soapbox about morality and virtue, whether in a Christian context or no.

It is decidedly, deliberately, unabashedly Troperiffic. The Theory of Narrative Causality is in full force, and characters are Genre Savvy enough to actively invoke tropes if they stand to benefit from them (in the first book alone Princess Alisande calls upon "Underdogs Never Lose" and "The Good Guys Always Win"). The result is a Post Modern series in the trappings of an Historical Fantasy (complete with Ye Olde Butchered English, even though technically they are speaking French), a flood of classic poetry, and a series of Lampshade Hangings which can only be described as loving..

Tropes displayed in this series include: