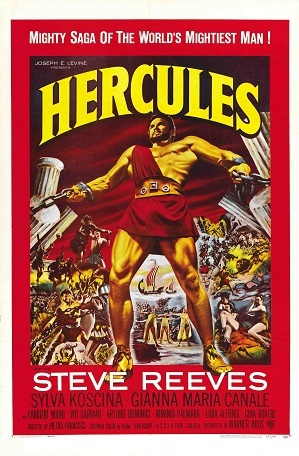 "I've been abandoned by the GODS!"
— Hercules, voicing an oft-repeated phrase
Advertisement:

A 1958 Italian Sword and Sandal film based upon the mythical Greek hero. It featured Steve Reeves in the title role and made him an international star. The movie draws material from the Twelve Labors of Hercules, throwing in some of Jason and the Argonauts as well. The film spawned one sequel with Reeves, Hercules Unchained, and several more with other lead actors.

Hercules (aka The Labors Of Hercules)

Demigod Hercules travels to Iolcus, where he is to become a personal trainer to Prince Iphitus, heir apparent to the throne of the city. Along the way he rescues the lovely Iole, who it turns out is Iphitus' sister and Princess of Iolcus. Iole tells Hercules of the night her father, Pelius, ascended the throne when his brother the king was killed; it is suspected that Pelius himself was involved in the previous king's death.

Hercules arrives in time to overhear a prophecy concerning the true heir to Iolcus' throne, then takes to training Iphitus. Iphitus, for his part, is quite arrogant and self-indulgent; but he gets his when he overestimates himself and takes on an escaped lion — and quickly gets chomped. Hercules dispatches the lion, but not in time to save Iphitus, and is left humiliated because he failed to protect the prince.

Enough of that, the Greek Oracle tells him, sending him off to his next "labor" for the gods. Hercules objects, wanting to be normal even to the point of renouncing his immortality. In the meantime, a young man named Jason arrives in the city, claiming to be the son of the late king; he proposes to fetch the Golden Fleece — a royal heirloom with which he can prove his identity — and Pelius gives him leave to do so, but secretly sends his henchman along to sabotage the voyage.

The crew of Jason's ship the Argo engage in a few mini-adventures on their way to retrieve the Golden Fleece. They make a pit stop at an island inhabited by Amazons, where they all fall in love — and where they are almost killed. Eventually they make it to the hiding place of the Fleece, where Jason must fight a dinosaur guarding the Fleece. The Fleece, it turns out, has a message written on it, in blood, yet!, declaring Pelius responsible for the death of his brother the king, but asking the gods to forgive him and forbidding traditional vengeance.

And so the Argo returns to Iolcus. But the henchman has done his job well; upon arrival the Fleece is missing, and Pelius charges Jason and his crew with treason. Hercules, Jason and the Argonauts fight Pelius' royal guard and get the upper hand (especially when Herc topples part of the palace on top of them) and kill the henchman. Seeing his undoing, Pelius confesses to Iole and poisons himself.

Jason takes his rightful place as King of Iolcus, and Iole marries Hercules.

Hercules Unchained (aka Hercules And The Queen Of Lydia)

Based very loosely upon the myth of Hercules and Omphale, the second movie's teaser introduces us to Femme Fatale Omphale, who skates through the male population like a hot knife through warm butter — and then has them killed when she's done. The film proper starts with newlyweds Hercules and Iole, along with Herc's young sidekick Ulysses (and yes, he is that Ulysses), arriving in Thebes to begin new adventures. They are immediately set upon by Anteaus, son of the Earth Goddess, but Herc quickly defeats him by dumping him into the sea.

The heroes are diverted from their destination of Thebes, and arrive at a cave where dwells Hercules' old friend King Oedipus, who has been deposed; turns out he turned over the throne of Thebes to his sons Eteocles and Polynices on the grounds that they share rulership; Eteocles is currently ruling and refuses to step aside, and Hercules is sent in to negotiate. Eteocles acquiesces rather abruptly, and Hercules brings the news to Polynices.

Or, rather, he attempts to. Along the way Hercules drinks from an enchanted well and loses his memory; he and Ulysses are captured by the royal guard of Queen Omphale. We learn here that the enchanted well is how the Queen acquires all her men; she tells the amnesiac Hercules that he is her husband, and that Ulysses (who is pretending to be deaf/mute) is just a servant. As Hercules basks in royal luxury in Omphale's palace, Ulysses snoops about and eventually discovers just what Omphale does with her discarded "husbands" — she hires Egyptian taxidermists to create a Wax Museum Morgue of her conquests — and sends a messenger pigeon back to his family in Ithaca; in the meantime, he attempts to help Hercules regain his memory, to no avail.

Meanwhile, Iole is arrested, for no apparent reason, by Eteocles, who has rescinded his decision to turn over Thebes to his brother. With no word from Hercules, Polynices brings his army and lays seige to Thebes, and his general takes custody of Iole. The two brothers agree to settle their differences with a duel to the death — which ends with both their deaths.

Meanwhile, Hercules finally regains his memory just as his companions arrive from Iolcus. But Omphale doesn't give up that easy, and the heroes must battle their way to freedom. Realizing that the time he lost with Omphale means that Thebes has gone to civil war, Hercules must come up with a plan to sneak into the city, stop the warring factions, and rescue Iole.

As stated above, there were several subsequent films detailing the various exploits of Hercules, but not necessarily in the same continuity as Reeves' films given the wholesale replacement of the entire cast of characters, save Herc, in each new film. In fact, as it turns out, many of the subsequent "Hercules" films were originally centered on other mythical strongman heroes such as Maciste and the Biblical hero Samson, who were renamed to "Hercules" when re-dubbed for American distribution; for example, Hercules Against the Moon Men is originally a Maciste film. Meanwhile other Hercules films, like The Loves of Hercules, are actually Hercules films but were produced independently from this film series. For this reason, not to mention for purposes of relative brevity, this page deals mainly with the two films of the Reevesverse.