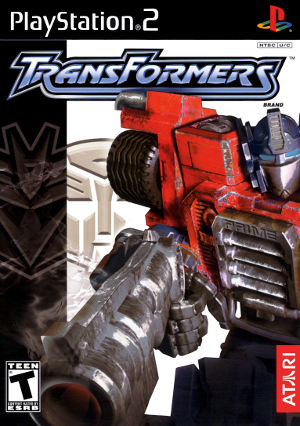 A video game based on the Transformers franchise, originally promoted under the title Transformers Armada: Prelude to Energon. Released in 2004 and developed by the Australian Melbourne House team, the game is a third-person shooter, specifically based upon the Transformers: Armada series, but not taking place within the same continuity. The basic premise is quite simple and not that indifferent from the show; after fleeing the Autobot/Decepticon war on Cybertron, the Mini-cons are located one million years later. Knowing that they could help turn the tide of the war, both factions head to Earth in order to retrieve them. The player has the opportunity to take control of one of three Autobots; Optimus Prime, Hot Shot and Red Alert, as they explore the many environments across the world searching for Mini-cons. Along the way, they meet opposition from the Decepticons. Once found, the Mini-cons can upgrade the abilities of the Autobots and be manually assigned by the player to mix-and-match a whole set of firepower or defensive capabilities.
Advertisement:

Despite a few bugging criticisms, like somewhat repetitive game-play, the small roster of characters and sometimes high difficulty level, the game was very well received by both fans and critics alike and, until Transformers: War for Cybertron was released, was often considered to be the best Transformers game made. It also became one of the highest-selling games on the PlayStation 2, ranking as the 6th highest selling game at the time.

Not to be confused with Transformers: Call of the Future, a Transformers video game released a year prior to this one that was exclusive to Japan and based on the continuity of the Generation 1 cartoon.