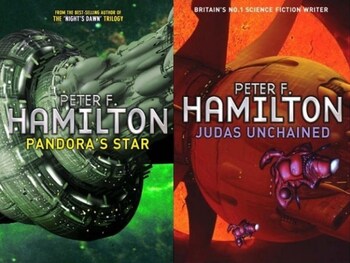 The Commonwealth Saga starts off in the 24th century, where cybernetics and biotechnology have advanced to the point where immortality becomes optional. Wormhole technology has also been developed, allowing easy transportation through space. The series itself is a space opera with numerous characters.

The series includes the books Pandora's Star and Judas Unchained. Misspent Youth takes place a century or two earlier in the same universe but is usually excluded from the "Saga" designation, including on the author's website

, since the plot is unrelated. The Saga is followed 1500 years later by the Void Trilogy and the Chronicle Of The Fallers, which take place roughly in parallel. Together these series comprise the "Commonwealth Universe".

Tropes specific to one of the books should be listed on that book's page. Use this page for tropes that describe the Commonwealth Saga as a whole.