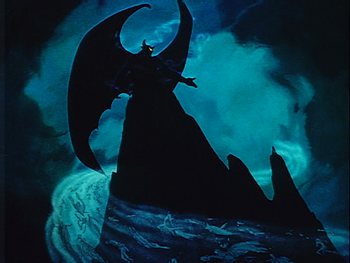 "Night on Bald Mountain" was a musical piece composed by Modest Mussorgsky completed on June 23, 1867. Unfortunately, due to his own mentor refusing to play it and despite his efforts, it never saw production in his lifetime. In 1886, his work finally achieved fame and is still best known in Nikolay Rimsky-Korsakov's edition, a "fantasy for orchestra" titled A Night on the Bare Mountain (1886), composed five years after Mussorgsky's death. It instantly became a hit in St. Petersburg.
Advertisement:

It is featured in the finale of the 1940 film Fantasia, and conducted by the late Leopold Stokowski. The story that goes with the piece, written by Mussorgsky describes a sabbath of witches worshiping Satan, or in the adaptation the Slavic God of Darkness, Chernabog, and the witness to the events.

Because of the story, many people associate this work with Hallowe'en; the sabbat it describes actually takes place on Midsummer's Eve/St. John's Eve (June 23rd in the Gregorian calendar, July 6th in the Julian).