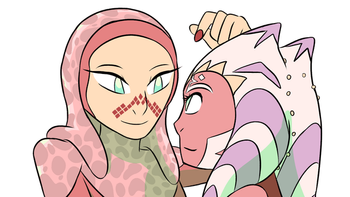 Contrasts is a Star Wars fan comic written and drawn by Gizzlescribbles. It mainly takes place during the Clone Wars Era and focuses on Ahsoka Tano and Barriss Offee and their relationship with each other. This comic is obviously not canon, and it is confirmed by Word Of God that the story will veer from canon as it goes on. The comic can be read here

This web-comic provides examples of: