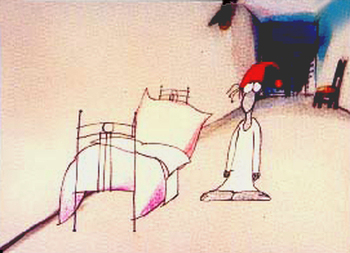 Before things get weird.
Advertisement:

Tup Tup is a 1971 animated short film (12 minutes) from the former Yugoslavia (or the current Croatia), directed by Nedeljko Dragić.

A man has retired for the evening. He relaxes in bed, attempting to read a newspaper. However, from the downstairs apartment the man hears an annoying noise that sounds like "tup tup". The man yells in anger and bangs on the floor with a broom, to no effect. Finally he takes radical action, blowing up the entire apartment building. It's here where the film turns bizarre and surreal, as the bomb destroys the entire apartment building but somehow leaves the man unscathed on his bed, which is now resting on the open ground. The only thing left of his apartment building is a pile of bricks—which sort themselves into the shape of a man, who runs away. From that moment, what was once a cartoon with a fairly coherent story becomes a parade of bizarre, nonsensical, dreamlike animation that recalls the later work of Bill Plympton in the United States.