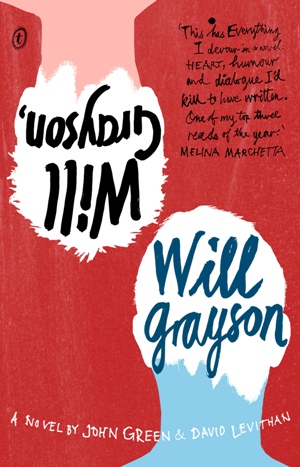 Will Grayson, Will Grayson is a young adult novel written by John Green and David Levithan.

The chapters alternate narrators between two people named Will Grayson. The first Will Grayson (narration by John Green) is introverted, straight, and tries to avoid unhappiness and disappointment by abiding by two rules: "don't care too much, and shut up" — in contrast to his lifelong best friend Tiny Cooper, who is extroverted, and both "really really gay" and "really really large". The second Will Grayson (narration by David Levithan) is a loner, cynical and clinically depressed, who is in love with his AIM buddy Isaac and puts up with his sort-of friend Maura.

The two Will Graysons meet up about a third of the way through the novel, when the second Will Grayson goes to meet Isaac in person for the first time. What follows is a heartwarming Coming-of-Age Story about friendship, drama, coming out of the closet, and the gayest musical to ever grace the high school stage.

Said musical eventually received a full treatment in the form of Hold Me Closer, a companion book written by David Levithan and published in 2015.

Tropes involved in this work include: