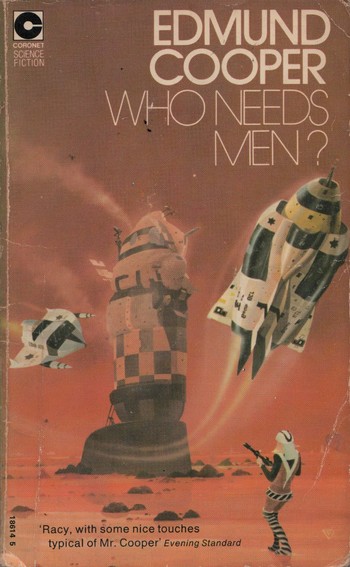 Typically for the 1970s, the cover art has nothing to do with the story within.
"It is more than two and a half centuries now since we threw off the yoke of slavery, since we expelled the last men, the last troublemakers, from the civilised society of the Republic of Anglia. They thought they were indispensable. They thought that womankind could not get along without them. History shows how wrong they were. How very wrong they were."
— Prime Minister Curie Milford
Advertisement:

Who Needs Men? is a 1972 dystopian Science Fiction novel by British poet, author, journalist and former merchant mariner Edmund Cooper. Its American edition was published under the title Gender Genocide, hinting even more clearly at its central conflict.

In the 25th century, following apocalyptic disasters including large-scale biological warfare, the Republic of Anglia (in what was formerly England) is a scientifically advanced all-female state, its inhabitants reproducing through a vaguely Brave New World-like system of mass-scale cloning. It is also an effectively totalitarian state, perpetually at war with the struggling remnants of the former patriarchal order that still linger in the Northlands. The aim of Anglia's leaders is that these "regressives" should, eventually, be completely exterminated.

One of those tasked with realizing this aim is Rura Alexandra, a conscientious and idealistic young cadet in her final year at the principal Anglian military academy. Though regretting the violence of the war, Rura understands its necessity for making a better and safer future for her sisters—or so she thinks. As she is deployed and experiences more of the actual conflict, however, she begins increasingly to doubt her own side's rectitude. The familiar propaganda notwithstanding, the horrible enemy, when seen up close, appears still strangely... human.

Contrast with The Handmaid's Tale, its Spiritual Antithesis about a No Woman's Land run by Straw Misogynists.

Animals have a right to live, if they can.