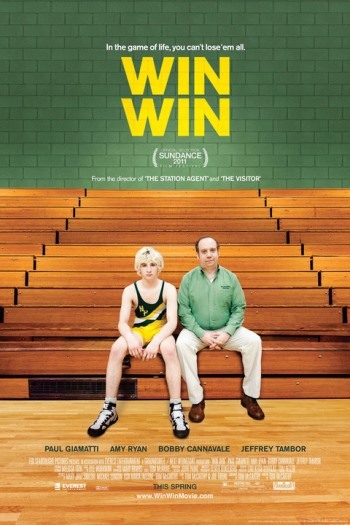 You can't lose them all.
Advertisement:

Win Win is a 2011 sports comedy-drama film directed and written by Tom McCarthy.

Attorney and volunteer High School wrestling coach Mike Flaherty (Paul Giamatti) is running out of money, with both his house and his office needing repairs. Out of desperation, he arranges to become the guardian of a rich, elderly dementia patient to get the $1500-a-month stipend from the state and puts the old man in a nursing home paid for by the client's own estate. Things get complicated when the old man's teenage grandson unexpectedly shows up, having run away from home. At first sullen and uncommunicative, Kyle later warms up to Mike's family and starts wrestling on Mike's team - as it turns out, he's a talented wrestler who seems destined for a bright future. Then his mother, Cindy, shows up, fresh from rehab...