Radio / The Paradise of Death 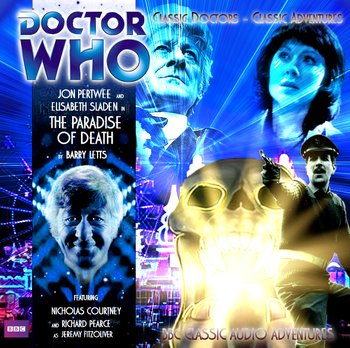 The Paradise of Death is a radio drama based on Doctor Who, produced by The BBC and first broadcast in five episodes on BBC Radio 5 from 27 August to 24 September 1993. The original radio play was released on CD as part of the BBC Radio Collection in March 2000. A second radio play featuring the Third Doctor, The Ghosts of N-Space, was broadcast in 1996. Jon Pertwee, Elisabeth Sladen and Nicholas Courtney all return to play their Doctor Who characters.
Advertisement:

Brigadier Lethbridge-Stewart asks the Doctor to investigate a mysterious murder near a new theme park called Space World. Together with Sarah Jane Smith and her photographer Jeremy Fitzoliver, the Doctor investigates the mysterious Parakon Corporation, which is not quite of this world.