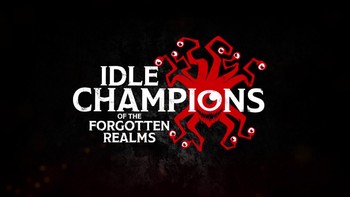 Idle Champions of the Forgotten Realms is an Idle Game by Codename Entertainment, best described as Crusaders of the Lost Idols meets Dungeons & Dragons. Like its predecessor, it has a party formation mechanic where characters buff other characters depending on their positions, as well as an equipment mechanic that boosts the capabilities of your characters.