Your Brain Won't Be Much of a Meal 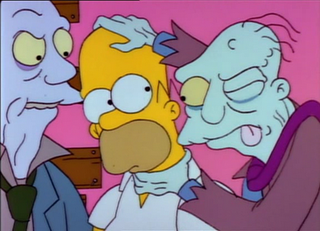 When a Brain Eater encounters a character who manifests a few Stupidity Tropes, they will realize the contents of their prey's cranium (or lack thereof) will provide little to no sustenance to them.

This trope can be demonstrated in a few ways:

A subtrope of Disability Immunity. Compare/contrast with Too Spicy for Yog-Sothoth. Related to Too Dumb to Fool. If the potential victim seems insulted by the rejection it can overlap with Aren't You Going to Ravish Me?. Often used as a Stealth Insult.