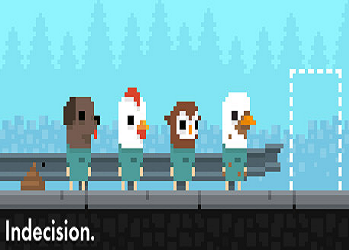 Indecision. is a so-called "haiku platformer", developed by Bilge Kaan (who later developed stikir) and released for PC through Steam on February 8th, 2018.
Advertisement:

The game's description is intentionally vague, and though commercial it is very brief; it can be comfortably beaten within 15 minutes. Thus, the spoilers present on this page are left unmarked.