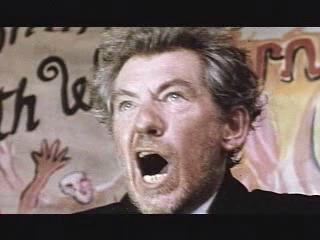 "There'll be no butter in hell!"
"We are not like other folk, maybe, but there have always been Starkadders at Cold Comfort..."
Advertisement:

A comic novel by Stella Gibbons, first published in 1932, which parodies the doom-laden rural novels of the time. The immediate inspiration for, and targets of, Gibbons's satire were the novels of Mary Webb and Sheila Kaye-Smith (which deserve it... try one), but she also pokes fun at more redoubtable figures such as D.H. Lawrence, Thomas Hardy and the Brontës. At the same time she has a good laugh at Vogue-reading London socialites, while mocking the genre in which a young orphan girl brings joy and happiness to the lives of all around her. Jane Austen is the novel's presiding spirit, and Mansfield Park provides the epigraph: 'Let other pens dwell on guilt and misery.'

The plot is simple: Orphaned at 19, Flora Poste decides to go and live with her relatives and improve their lives rather than find a job. She settles on the Starkadders at Cold Comfort Farm, since, according to the novels of rural life she has read, their lives will certainly need tidying up. Arriving at the farm she finds it even more chaotic than she had feared, and the inhabitants more uncouth than she could have imagined.

Needless to say, Flora rolls up her sleeves and gets to work, finding each of the main characters a more suitable outlet for their energies and obsessions, while fending off the libidinous Hampstead intellectual Mybug (quite possibly modelled on DH Lawrence) who has designs upon her virtue.

A film adaptation was released in 1995, directed by John Schlesinger, with a script by Sir Malcolm Bradbury, and starring Kate Beckinsale as Flora, with Joanna Lumley, Eileen Atkins, Rufus Sewell, and Ian McKellen also heading the cast.

Being a parody, Cold Comfort Farm is naturally rich in tropes. They include: