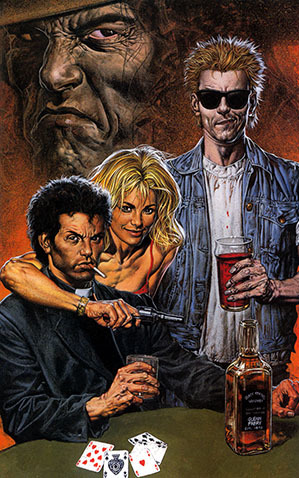 "Don't take no shit off fools. Judge a person by what's in 'em, not how they look. An' you do the right thing. Be one of the good guys. 'Cause there's way too many of the bad."
— John Custer, to his son Jesse
Advertisement:

Garth Ennis' Preacher tells the story of Jesse Custer, a down-at-heel Texan preacher whose life is turned around when he is cursed with The Word of God, which compels people to do whatever he commands. After finding out that God has abdicated His throne, Jesse sets out on a quest to bring Him to task, joined by Tulip, his ex-girlfriend-turned-hitman, and Cassidy, an Irish vampire.

Their quest takes them across the dark heart of America, from the streets of New York to the Louisiana swamps, and along the way they meet inbred hicks, serial killers, John Wayne's ghost, The Saint of Killers, the retarded descendants of Jesus, an ancient religious conspiracy, a pair of perverted Sexual Investigators, Bill Hicks, the anti-Pope, fallen angels, voodoo children, psycho goths, The Klan, and a kid with a face like an arse.

The book enthusiastically denies the Christian concept of a loving God, satirizes various aspects of modern living and throws in a few good fistfights and explosions along the way. It was published by Vertigo Comics. The series lasted for 66 regular issues, running from April, 1995 to October, 2000. There were also a number of specials and a 4-issue mini-series featuring the Saint of Killers.