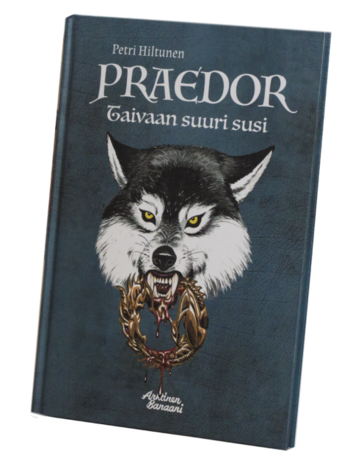 Praedor: The Great Wolf of the Heavens
Advertisement:

is a Finnish Sword and Sorcery / Medieval European Fantasy franchise started by the acclaimed graphic novelist, Petri Hiltunen in 1986. Set in the world of Jaconia, a circular region of land around the size of India, surrounded by the seemingly infinite cursed land of Borvaria, it has inspired multitudes of graphic novels, short stories, novels, as well as a tabletop RPG over the decades from a number of Finnish fantasy novelists. The titular Praedors are adventurers who dare to explore beyond the boundaries of Jaconia and seek forgotten treasures from the ancient ruins of Borvaria. They are widely seen as dishonourable scoundrels, but their freedom from Jaconia's strict social caste system makes them desirable pawns in power plays far from the boundaries of the cursed lands.

The franchise is yet to receive translations outside the country, making Praedor a case of No Export for You for English-speaking consumers.

The Praedor franchise consists of the following works: