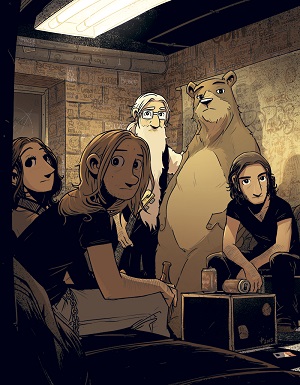 Perkeros is a avant-garde metal band from Tampere, Finland. Consisting of obsessive songwriter-guitarist Akseli, art student keyboardist Lilja, old hippie bassist Kervinen and the drummer Karhu is having both internal and external problems. Akseli sacrifices his relationship to the altar of music, the demo covers need to be finished, the annual Battle of the Bands is nearing, the rivaling hipster band Diablotus is gaining popularity alarmingly fast and Perkeros is still missing a singer.

Things start to look better when Lilja comes across Aydin, an immigrant pizzeria worker with a fantastic voice. However, it seems like that even the new addition can't hold up together the band as Akseli gets sucked deeper into the fascinating and dangerous world of soundwaves...

Written and drawn by K.P. Alare and J.P. Ahola in 2013, Perkeros mixes together comedy, slice-of-life band moments, science fiction, fantasy, and occult. The authors signed contracts for English and French releases, which saw the light of day in 2014 (renamed Sing No Evil in English and Perkeros: Les Notes Fantômes in French).