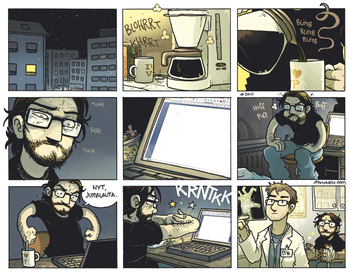 "We live somewhere in between youth and adulthood, but my back can't take any more of this limboing. Something has to change."
Advertisement:

Northern Overexposure (original title Villimpi Pohjola, Finnish for "Wilder North") is a Finnish Slice of Life Sunday Strip comic written and drawn by JP Ahonen, started in 2005. The comic follows the lives of a group of University students somewhere in Nothern Finland. The cast tries its best to balance between their carefree youth and the responsibilities of adulthood,each in their own way.

The comic is notable not only for its clever and creative writing, but also for its well-developed cast and the heavy doses of Postmodernism.

The albums released so far: