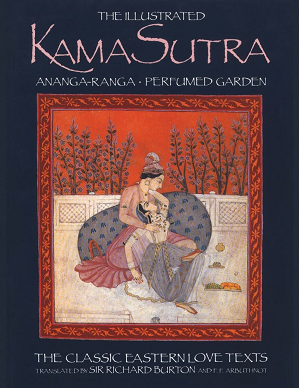 A couple of thousand years or so ago, a man called Vatsyayana Mullanaga got it into his head to compile a book of all the sex tips he could find in his homeland of India. This tome was called the Kama Sutra (lit: Pleasure Sayings) and even today it is a byword for sexuality around the world. Yet, like so many classic literary works, it's one of those famous works that a lot of people have heard of, but few have bothered to read (in full). Pop-Cultural Osmosis has reduced it to supposedly being nothing but a pornographic book with a lot of naughty pictures. In reality there is an entire philosophy behind the sexual acts described in the book. Another Urban Legend claims it is a religious work, which isn't true either, although some cultures may regard sex as an act of worship.

There are a couple of other Eastern sexual wisdom texts, the Ananga Ranga and The Perfumed Garden, but these are referenced far less often.

There is also a film, released in 1996, starring Indira Varma and Naveen Andrews. So something for everyone there. Not to mention numerous 'ahem!' educational DVDs.

This book has examples of the following tropes;