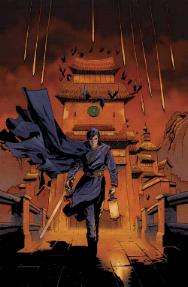 The Portent is a Swedish Heroic Fantasy Comic Book written and drawn by Peter Bergting and originally published in English for Image Comics. A Wandering Swordsman named Milo arrives in the valley of the dead one day, with no particular goal in mind. Almost immediately attacked by enemies, Milo wonder what has happened, as he can remember a time when humans and spirits could live side by side. The answer comes shortly however, as he arrives at a monastery where he meets a Nun named Lin and an old warrior named Alkuin. They are the sworn defenders of a good spirit named "Dai-Ju" wich is kept and revered in another monastery. Milo is told that he is the Chosen One who must defend the good spirit from the threat of the Demon Guishen. Milo find this hard to believe, until his presence seemingly causes a hail of meteorites to strike down an encroaching Enemy horde that had arrived to lay Seige to the monastery. Now filled with Bravado the trio makes their way to the find the Dai-Ju. But is everyone really whom they seem to be and is Milo really the man chosen by the gods, as told long ago?

A surprise hit, "The Portent" was widely praised by critics both in Sweden and America, including Mike Mignola whom Peter Bergting counts as a huge inspiration for his comic. "The Portent" helped kick off a new wave of Fantasy Comics in Sweden, after a decade where Alternative Comics had ruled supreme. There was also talk of a movie adaption for a while, but not much seems to have come off it.