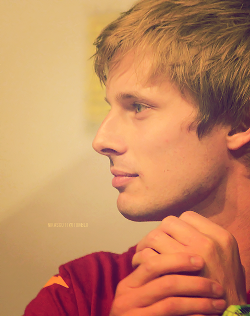 An English actor (born 11 October 1983 in Exeter, England). He is best known for playing Prince (later King) Arthur in the BBC series Merlin (2008), who grows from an impulsive and Innocently Insensitive Royal Brat to The Good King.

James has a reputation for being Mr. Fanservice with countless shirtless scenes, but has soundly proved his acting abilities in dramatic scenes (like this (spoiler!) one

). Amusingly, his roles tend to be involved in Love Triangle. He seems to have a tendency to play athletic characters too.