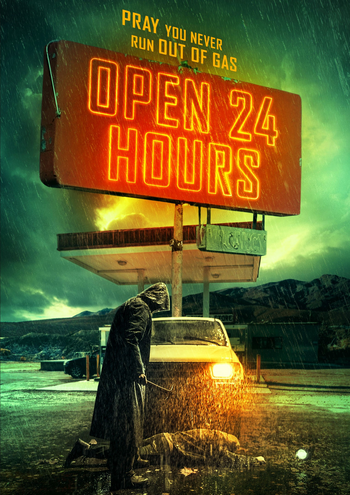 The gas prices aren't the only scary thing here.
It's a foggy, winter day in the middle of nowhere. And on the long, curving highway is a gas station. A generic, everyday, normal gas station. The perfect place to be haunted by a ghost, stalked by a serial killer, or realize how ridiculously expensive the fuel is there.
Advertisement:

For a number of reasons, writers like to use lonely gas stations as a setting for horror. Much of this is perhaps that gas stations are a place that almost anyone who's been in or driven a car needs to visit at least once in a while. As such, it is bound to attract some weird and even dangerous people, both in real life and in fiction.

Combine this with their sometimes dingy, run-down look and feel, as well as the fact that they can be found in all but the most remote parts of the world, and you have the recipe for a decent horror setting.

Compare Creepy Gas Station Attendant, who often manages these. My Car Hates Me is almost guaranteed to happen. May even involve Sinister Cars. For more road trip points you absolutely do not want to get caught up in, see Inn of No Return, Hell Hotel and Old, Dark House.