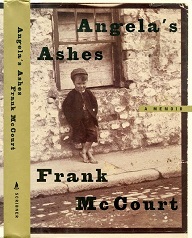 Angela's Ashes is the 1996 memoir of Frank McCourt (1930—2009), an Irish-American child growing up in poverty in Ireland. It is a collection of various anecdotes and stories of his impoverished childhood and early adulthood in Limerick, Ireland.

It was adapted into a 1999 film, directed by Alan Parker and starring Robert Carlyle as Malachy Sr and Emily Watson as Angela.