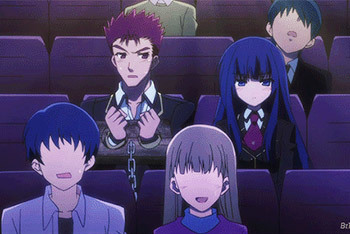 Ironically, they're watching The Escapist.
Advertisement:

Ah, a romantic evening! Lighted candles, soft music, one person (usually the woman, though the proliferation of the Yandere trope has resulted in increased chances of a male character being subjected to it) tied up and possibly gagged...

This trope normally follows these conventions:

Compare No, Mr. Bond, I Expect You to Dine for when a captor treats his victim in a more platonic manner. Contrast Dinner and a Breakup, where one partner doesn't want to be there for other reasons. Not to be confused with Shotgun Wedding.

Note: The victim doesn't need to be tied up, but must be held captive.

In the Princess Diaries 2 review, Hyper-Fan Girl has Nostalgia Critic go on a date with her at gun-point.

In the Princess Diaries 2 review, Hyper-Fan Girl has Nostalgia Critic go on a date with her at gun-point.