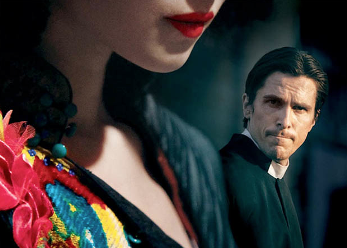 A 2011 historical drama film made by Zhang Yimou, The Flowers of War (or Nanjing Heroes/13 Flowers of Nanjing) is set in 1937 during the Rape of Nanjing (see Second Sino-Japanese War). An American mortician, John Miller (Christian Bale), is caught in the conflict and seeks shelter at a church full of terrified Catholic school girls, as do a number of prostitutes who take up residence in the church's cellar.

At first simply wanting to be paid for the funeral he came to perform, Miller reluctantly pretends to be a priest in order to protect the girls, and to buy enough time for him to fix the church's broken truck so they can escape the city - although there isn't room in it for all of them and the prostitutes, who naturally want to get out of Nanjing as well. But, as the Japanese atrocities grow ever more terrible and the students are threatened, Yu Mo (the de facto leader of the prostitutes, played by Ni Ni) and her fellows take it upon themselves to save the girls from an awful fate.