Film / The Mask of Fu Manchu 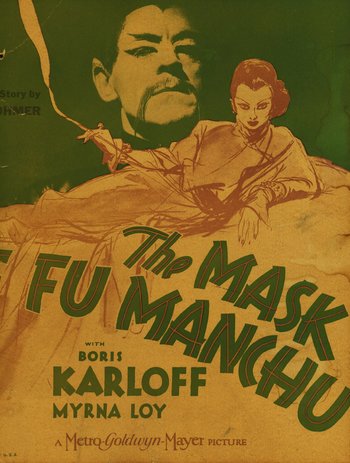 The Mask of Fu Manchu is a 1932 film directed by Charles Brabin. It stars Boris Karloff as Fu Manchu, Lewis Stone has his nemesis Sir Nayland, and Myrna Loy, a couple of years before she broke out to stardom, as Fu Manchu's daughter Fah Lo See.

Sir Nayland Smith, an agent of the British Secret Service, calls on well-known Egyptologist Sir Lionel Barton. He informs Barton that British intelligence indicates that the evil Fu Manchu (Karloff) is searching for the long lost tomb of Genghis Khan, with the purpose of reclaiming Genghis's ceremonial mask and sword. With these tokens, Fu Manchu can assert himself as the new Khan, and then "all Asia rises" and attacks the West.

Unfortunately, Barton is kidnapped by Fu Manchu's minions shortly after this. Nayland, Barton's daughter Sheila (Karen Morley), and Sheila's boyfriend Terry (Charles Starrett) set off themselves in search of the mask and sword and Sheila's father.

This is the fourth film based on the popular novels by Sax Rohmer, and the only one to star Boris Karloff.