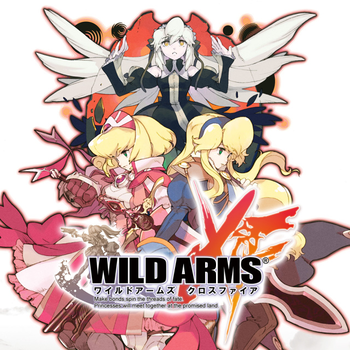 "Some lies are worth living"

A Turn-Based Strategy game in the Wild ARMs series, released for the PSP.

Wild ARMs XF (pronounced "Wild ARMs Crossfire") follows the story of a Drifter named Clarissa Arwin, whose mother was seeking answers to the decay of the eternally unlucky planet Filgaea. Along with her protective adopted big brother Felius, she is tracking down Rupert, who stole her mother's sword. Entering the kingdom of Elesius, she is almost immediately mistaken for the dead heir to the throne, Princess Alexia. This proves useful when she finds out that the citizens of Elesius are chafing under the restrictive rule of four Evil Chancellors: Charlton, Edna, Weisheit and Rupert. Clarissa adopts the role of the Princess Royal and leads a Ragtag Bunch of Misfits in a quest to restore justice to Elesius.

Though billed as a straight-up Tactical RPG, featuring a Class and Level System and grid-based movement, XF is more of a puzzle game: you are given a specific set of tools and must use them to solve whatever challenge is presented to you. This is reinforced by a new statistic, "Vitality Points," which function rather like your deck in Hearthstone: when you run out, you take escalating HP damage, limiting your ability to simply out-endurance the opponent. While all of this is a logical extension of the entire T/RPG formula, it results in occasional bouts of Railroading and Trial-and-Error Gameplay. The Class system takes similar cues to that of subgenre titan Final Fantasy Tactics in requiring each character to unlock various skills by earning "Class Skill Points," but allows greater freedom of mixing-and-matching of learned skills. It also limits each class to only four "Original Commands" (IE spells), forcing each of them to focus on a niche and lowering the incidence of Tier-Induced Scrappy classes. Finally, the game uses a hex-based map instead of square tiles, and adds bonus damage when enemies are surrounded on two, three or six sides.

The game received mixed reviews and was a Franchise Killer until the 2018 release of the Mobile Phone Game Wild ARMs: Million Memories.

A manga adaptation was produced with side-stories and an epilogue set after the game.