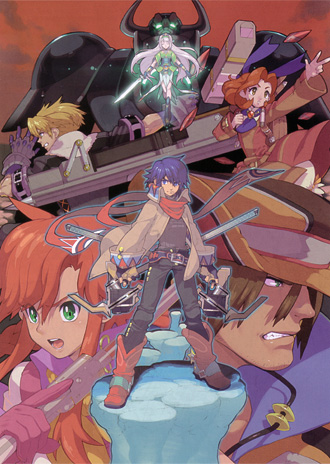 Wild ARMs 5, released in Japan as Wild ARMs: The Vth Vanguard on 2007, returns us once again to the improbably disaster-prone planet of Filgaia.

Humans struggle under the rule of the Veruni, a highly-advanced race of Human Aliens that conquered the planet a century ago. The world is full of Lost Technology, the most prominent ones being Humongous Mecha known as Golems and special weapons called ARMs. Those who search for this Lost Technology are known as Golem Hunters.

Dean Stark is an average 16-year-old boy who dreams of leaving his tiny hamlet and becoming a world-renowned Golem Hunter. One day he witnesses something fall from the sky: a golem's arm clutching a strange white-haired girl named Avril. What begins as a simple quest to help Avril regain her lost memories soon develops into something far more grandiose as Dean learns the true extent of the divide between the Human and Veruni races, and vows to reform a system that is hurting both sides.

Joining Dean and Avril on their journey are: Rebecca Streisand, Dean's childhood friend who dreams of becoming a famous gunslinger; Greg Russellberg, a drifter and "Golem Crusher" who has vowed to destroy all Golems; Carol Anderson, a child prodigy with an interest in Golem research; and Chuck Preston, a rookie Golem Hunter looking to climb the ranks.

Wild ARMs 5 uses the same engine and HEX battle system from Wild ARMs 4 but with several refinements and improvements. The number of members allowed in battle at once is reduced to three, while the much derided need to choose between movement and attack was removed. For dungeons, the use of tools to solve puzzles returns in the form of unique bullets for Dean's ARM, combined with other actions such as sliding and stomping. Being published on the tenth anniversary of the franchise, it also includes a ton of references and cameos from previous Wild ARMs games.